Blood can be obtained from lizards from several sites. Some of them are: ventral coccygeal vein, ventral abdominal vein, jugular and brachial plexus.

This is the most common and convenient site for venipuncture in lizards and the one with the least complications. This is considered a blind technique. So, where is it? The ventral coccygeal vein can be found along the ventral midline or laterally. It can be accessed either ventrally or laterally. It is partially protected by the ventral spinous processes. Some lizards have very tough semi-calcified scales along the ventrum and tail, which make the insertion of a needle difficult at this site….so be aware of this.

Whether the approach is ventral or lateral, the needle should be inserted along the length of the tail at least 20% and no more than 80% of the distance from the base to the tip of the tail. It is important to access the vein at a location caudal to the cloaca to avoid damaging the hemipenes in males. The needle should be long enough to reach the vertebral body and of an appropriate diameter relative to the vessel size. For medium and large lizards, a 25-gaug needle of length 1–1.5 in is attached to a 3-ml syringe. For small lizards, a 27-gauge needle of length 0.5 in is attached to a 0.5- to 1-ml syringe. As always, don’t forget to prep the site with alcohol to avoid contamination.

For the ventral approach, the lizard can be placed in either dorsal or sternal recumbency. Sternal recumbency is preferred to minimize stress and difficulty in handling and to maximize the comfort level of the lizard. Wrapping the iguana with a towel and placing gentle pressure over the eyes of the iguana may aid in restraint. The lizard is placed at the edge of a table such that the tail either extends off the table. The needle is inserted along the midline either at a 45-degree angle to the vertebrae (to facilitate passage between the ventral spinous processes) or perpendicularly and is advanced until it contacts the vertebral body. Gentle negative pressure is then applied to the syringe while the needle is slowly retracted until blood flow is seen. If blood does not flow, the needle is repositioned and you can try again.

For the lateral approach, the lizard is placed in sternal recumbency. This approach requires a shorter needle than does the ventral approach. The lateral transverse processes create a visible ridge along the tail of most lizards. This can be used as a landmark, or palpation can be used to identify the transverse vertebral processes. The needle is introduced from the lateral aspect of the tail and is directed at a 90-degree angle to intersect with the vertebral body. Once the needle contacts the bone, it is slowly shifted (in very small increments) ventrally until it comes in contact with the vein. A gentle constant negative pressure is applied to the syringe during this process.
One thing to keep in mind when using this site is that tail venipuncture does carry the possible risk of tail loss in species with tail autonomy such as the Green iguana and Leopard gecko although this complication is fortunately rare. Not to go into too much detail but iguanas as do other species of lizards have the ability to ‘drop’ their tail should a predator grab it. 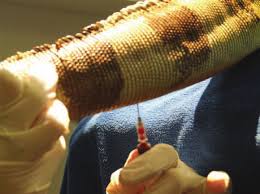 This site is also common especially in smaller lizards such as gekos or those lizards with shorter tails or when the ventral tail vein is not productive. Lizards have large abdominal veins that lie just under the skin along the ventral midline. This vein is easily located but it is also easily damaged by venipuncture.

The jugular vein is yet another site for venipuncture in larger species such as iguanas and monitor lizards. The jugular veins are located laterally and deep within the neck. They are seldom visible even when pressure is applied to occlude them. In species with an external ear opening, the tympanic membrane can be used as a landmark. Or you can follow on the lateral aspect of the neck from a point near the mandible to the point of the shoulder. This is usually considered a blind technique as previously stated, the jugular vein is seldom visible, therefore, you would use the landmarks stated above.

Lease common but still a site for venipuncture is the forearm arm.  The site is located near the shoulder joint caudal aspect to the humerus.  Please be aware that lymph fluid contamination can occur at this site.

How much blood do you draw?

When drawing blood from reptiles, technicians must be mindful of how much blood can be drawn. As a general rule, up to 0.5% of total body weight is recommended. Keep in mind, if the maximum amount of blood is drawn at one time, you must wait 5-10 days before another blood sample can be collected.

In Tuckerman’s case, if blood was needed, based on the research, I would try to draw blood from the ventral coccygeal vein.

One thought on “Venipuncture in Lizards”